Alethea’s focus included; working with commercial accounts, managing merchants’ account (credit card processing) for commercial accounts, managing the debit card portfolio by minimizing loses a 5% or less annually, and assisting commercial loans with on-boarding of new commercial accounts. She also planned, executed, and completed a full upgrade of converting the bank’s manual processes to automated computer systems for daily operations to a user friendly electronic experience for the safe deposit department, new accounts department and the teller line.  Alethea also participated on the committee that created and implemented the bank’s first website and online banking.  These skills and opportunities have afforded Alethea with a baseline and foundation of knowledge which allows her to know how to help commercial customers with confidence and ease regardless of their business size. 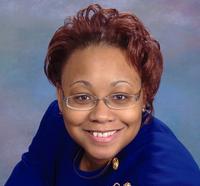 During Alethea’s endeavor to rise to the top, she had to learn how to balance work with home life while caring for her son, who struggled with several major health issues.  The delicate balance of parenting and working, lead her to the life changing decision to leave the bank as Assistant Vice President, a move that provided her the necessary time to better manage her family life.

After her departure from the bank, Alethea was unsure of where her income would come from to take care of her household.  However, she leaned upon her faith knowing inevitably a plan would present itself highlighting her next career path.  She eventually met a gentleman who suggested that she consider working in the healthcare industry, specifically medical billing.  She began vetting that idea which quickly piqued her interest because of her intimate exposure to doctors, hospitals, specialists and understanding the platform and process of a medical insurance policy for the sheer fact of ongoing treatments that were necessary to navigate her son’s healthcare.

Prior to establishing Rill Unique Enterprises (RUE), Ms. Bryant briefly worked in the insurance industry where she obtained her health insurance license.  After three years in the insurance industry, Alethea was forced to change paths again when the demand to care for her son's health became too much. At that point, the idea of a career in medical billing became far more attractive.  Once she realized that she could work in medical billing even from her son's hospital room, she did not hesitate to move forward with learning the requirements to enter the healthcare industry, specializing in medical billing and coding.

Alethea started Rill Unique Enterprises (RUE) and then enrolled in the medical billing and coding program offered by Allied Health Institute.  She successfully completed her program and passed her exam to become a Nationally Registered Certified Coding Specialist (NRCCS).  Shortly before completing her medical billing program, her first client, a psychologist in private practice was signed and is still a RUE customer 11 years later.  Another potential client approached Ms. Bryant not long after signing her first client, inquiring if RUE worked with alternative treatment providers such as massage therapist.  Ms. Bryant researched and determined that while years prior, insurance carriers were not allowing providers like massage therapist to contract with them, the doors were slowly beginning to open.  This eventually led to her second client, a massage therapist, who is also a RUE client 10 years later.  Embracing the importance of using alternative treatment methods with her own son and his ongoing medical challenges, Ms. Bryant knew that working with alternative treatment providers would become a passion for her to help those who help others in a non-traditional manner.  Eleven years later, RUE has become a subject matter expert in the healthcare industry knowing how to navigate the labyrinth of healthcare, especially the credentialing process, so all provider types are able to integrate insurance into their practice model.

Today, RUE’s primary focus is helping alternative treatment providers whom RUE has all worked with including massage therapist, chiropractors, acupuncturist, and mental health professionals nationwide.  RUE strives to level the playing field for most of these provider types by helping them understand that there is a company that understands their struggles as small business owners and also how to work with insurance in a way that enables them to be successful and stress free.  RUE knows all types of treatment should be covered by most healthcare insurance policies, but if you do not know the rules, how the claims process works, or you lack patience or time to benefit from accepting insurance, then you lose great  opportunities for so many to experience the benefits of alternative treatments.  RUE realizes that accepting insurance may not be the best option for all providers and practices, but for those that it is, RUE is there help you succeed!

Rill Unique Enterprises (RUE) is a medical billing, coding and credentialing company created by a single mother needing to have greater flexibility to raise her children and be an entrepreneur at the same time.  The CEO and owner, Alethea Bryant, worked in retail stores at the start of her career working from an entry level position to management swiftly.  Within a few months of working at Wilson's Leathers the opportunity to join a small private owned bank presented its-self and that was the moment her career was born in the financial industry.  Alethea began working at the bank on the teller line, and over her 13 year tenure she became the subject matter expert in every department she operated, including Safe Deposit Manager, New Accounts Manager, Teller Line Supervisor (where she managed multiple employees), and the primary substitute for branch managers on vacation at four separate locations.